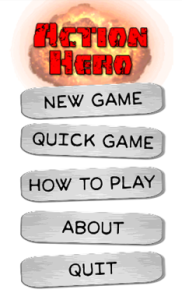 To become the ultimate star of action films by coming up with the best one-liners in randomly generated scenes.

-1 device with this app
-3 to 8 players
-Paper and writing utensils for each player
-A thirst for vengeance for what they did to your family.

A director of a new triple-A action film is chosen every round and the rest of the players are actors auditioning for the lead part. The director decides who he wants in his movie based on the one-liners the actors come up with for one of the scenes in the script. When someone is the director, they hold the device with the Action Hero app.

Each round has three phases: 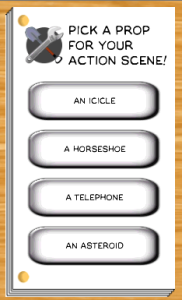 The director picks a prop from a list of four and reads the randomly selected scene featuring the prop. The director then starts the timer, and the actors have 60 seconds to write a one-liner for the scene on a piece of paper.

The director gathers the answers, mixes them up, and randomly passes out the papers to all the actors; this is so the director doesn’t know who wrote the lines and won’t be biased toward a one-liner because it belongs to the bastard who scarred his face in ‘Nam. The actors then take turns reading the lines given to them (it’s okay if you get your own), giving their best action hero performance 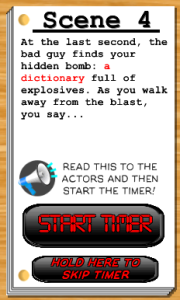 The winner and king of action cinema is the hero with the most points at the end of the last round. If there is a tie, the action heroes must share their title and be forced to do a buddy cop movie.

What is an action movie “one-liner”?

A one-liner is a clever line said by the hero, usually a pun, that is in response to an action scenario. For example…

…You bash a thug over the head with a telescope. As he falls down, you remark, “This does help people see stars!”

…You just foiled the bad guy’s plan to bring back the Ice Age. When the mayor asks you if it was difficult, you say, “It was snow problem.”

A smart quip in middle of dire circumstances displays a hero’s ability to remain calm and cool in the face of danger– so the more clever the line, the more badass the hero.

-It’s more important to focus on the prop than the scenario– trying to incorporate all details from a scene can be overwhelming. That said, if you can think up an all-inclusive quip, more power to you.

-The prop and scene combinations will be ridiculous. Don’t worry, that’s intended.

-Don’t be shy! There is no wrong answer, so try to submit something every round. You’ll get a better response than you think.

-At the beginning of the game, try to come up with an all-inclusive one-liner in case you freeze up and don’t know what to put. Insulting another player is allowed.

-Feel free to give reading instructions within parenthesis, such as “(read this with a French accent)”.

-If you enter a blank name, one will be assigned to you.

A Board Game in an App